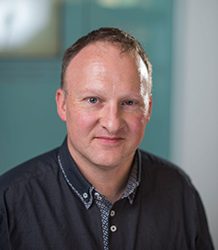 My research is mainly in Victorian media and I have a particular interest in the popular visual shows and media that so fascinated audiences during the nineteenth-century. The forms and devices I am fascinated by include panoramas, dioramas, 3-D photography, peepshows, magic lantern, kaleidoscopes and transparencies. I have held grants from the AHRC, Leverhulme Trust and Yale Centre for British Art to support my research. Much of my work at Exeter draws on the rich resources of the Bill Douglas Cinema Museum, a public museum and research centre that contains over 65,000 items covering the long history of the moving-image. More broadly, I am interested in the way that new communications and technologies during the Victorian period have links to contemporary culture and digital media. As well as visual shows and devices, I have published broadly on nineteenth-century print media, journalism and popular culture.

I am a member of the Centre for Victorian Studies at Exeter, which brings together the large number fo researchers we have working in the area. Follow our Twitter account for the latest Victorian news. I am also dedicated to encouraging Public Engagement and have been, or am, involved with collaborative events with Kensignton Palace, RAMM, Ilfracombe Museum and the Bill Douglas Cinema Museum.

My main research interests are print and visual media between 1800-1910. I'm especially interested in popular fiction, optical devices and shows, new technologies, the periodical press, and journalism and book history. My first book, Queen Victoria - First Media Monarch was published by Oxford University Press in 2003. It examined the influence of the development of popular media upon the character of the British monarchy. I continued my work on print media through two co-edited collections with Professor Andrew King (University of Greenwich). The first of these is a three-volume reference set, Popular Print Media 1820-1900, was published by Routledge in 2004. The se cond, Victoria Print Media: A Reader was published by Oxford University Press in 2005. In collaboration with a number of Victorianist colleagues at Exeter, I was lead editor on the multi-authored Palgrave Sourcebook to Victorian Literature (Palgrave, 2011).

My current work is on nineteenth-century moving projected and 3D images, and examines panoramas, dioramas, peepshows, stereoscopy and the magic lantern, as well as a host of other optical devices and shows. I have published a number of articles and chapters in this area. In 2007, I published Multimedia Histories: From the Magic Lantern to the Internet (2007), a co-edited collection of essays with James Lyons, on the history of new media and the way nineteenth-century visual technologies related to contemporary media. In 2008, my colleague, Joe Kember, and myself were awarded £204,000 from the AHRC for a research project, Moving and Projected-Image Exhibition in the South-West 1820-1914. This project mapped the exhibition of visual shows in a number of selected south-west locations between 1820 and 1914. One output from the project is the volume, Popular Exhibitions, Science and Showmanship 1820-1910 (Pickering and Chatto, 2012), which was co-edited with Joe Kember and Jill Sullivan. We also have a multi-authored book forthcoming from Oxford University Press in 2021, Picture Going: Visual Shows 1820-1914.

I was also scholarly editor for a digital resource published by Adam Matthews in 2012, based on the archives of the Bill Douglas Museum, entitled 'Moving Pictures, Optical Entertainments and the Advent of the Cinema'. It consists of 35,000 images drawn from items in the Bill Douglas Collection. Click here for details, http://www.amdigital.co.uk/m-collections/collection/moving-pictures-optical-entertainments-and-the-advent-of-cinema/

With the completion of Picture Going, I am working on a second book made up of case studies of individual optical media, particularly the peepshow and stereoscope. I am interested in the global circulation of the peepshow and its presence in Europe, China, India, Iran and Egypt.

I'm interested in supervising research students in any of the above areas.

I am interested in supervising students in most areas of Victorian literature, media and culture (see list of PhD students for current projects supervised).

I am particularly interested in supervising projects on print media (in any area), shows and exhibitions, visual culture, media and technology, and popular fiction.

Previous PhD students who have gone on to publish their theses include:

I am second supervisor for:

I am deeply committed to encouraging Public Engagement in universities and have been involved in a number of project promoting public engagement and impact. In 2013, I was one of four Champions for Public Engagement withing the university.

Previously, I have been involved with collaborative events with the Royal Albert Memorial Museum, Exeter, and the Bill Douglas Cinema Museum.  In 2012, I was involved in a collaboration with the BFI, making a short film on Dickens and the Magic Lantern, http://www.youtube.com/watch?v=omuDMHj0TZY. As part of the AHRC funded project on popular visual entertainments in the south-west 1800-1914, we put on a free touring exhibited that visited a number of public libraries in Devon, Cornwall and Somerset in in 2011-12.

I have contribued to the discipline in a number of ways. From 2006-12, I served as Treasurer of the British Association for Victorian Studies. I have also served as external examiner for BA programmes at Roehampton, MA in Victorian Culture at Royal Holloway, and examined PhDs at Birkbeck College and the Courtauld Institute.

My teaching draws heavily on my research in Victorian material and print culture; one of the benefits of teaching at Exeter is that we have enormously rich resources for teaching using original periodicals, journals and artefacts. My teaching on Dickens thus includes sessions analysing Household Words and All the Year Round, exploring his role as editor and journalist. Similarly, when teaching on the Victorian Studies MA pathway, we have sessions exploring new technologies and optical devices using the resources of the Bill Douglas Cinema Museum; students enjoy hands-on experience looking at original kaleidoscopes, stereoscopes and handbills for popular shows.